People have the power to thwart criminals and all it involves is turning a key or pressing a button, Greenville’s new police chief said at a luncheon.

People have the power to thwart criminals and all it involves is turning a key or pressing a button, Greenville’s new police chief said at a Tuesday luncheon.  “Secure your stuff, lock your doors and make it hard for a criminal to be a criminal,” Greenville Police Chief Ted Sauls said. The police department once studied a series of reported vehicle break-ins and found about three-fourths involve unlocked vehicles, he said, and about half of those had firearms in the vehicles.

Sauls, who has nearly 26 years with the department, including serving three times as interim police chief, reviewed his first weeks in office, his immediate priorities and reducing crime and improving safety at the Greenville Pitt County Chamber of Commerce Power Luncheon.  Property crimes, thefts and larcenies are among the top offenses the Greenville Police Department investigates, Sauls said. The department also gets many calls about speeding and other traffic offenses.  Crimes follow cycles, Sauls said, and when people look at the city’s 2022 statistics they’ll see the city’s crime rate is up, but the five-year average is still below earlier cycles.

“There’s still a ton of work to do,” Sauls said. “We are going to continue to look for methods to reduce traffic crashes, we will look for methods to reduce property crimes, to reduce speeding.  “Let me give you a piece of advice. It’s the holidays, we’re all going to be shopping, it’s going to be great,” Sauls said. “Everyday in life is not great. Just keep your eyes open, stay aware. Don’t be paranoid, don’t let it cause you to not go where you want to go.”  However, keep packages in trunks and keep vehicles locked, he said.

Sauls said while he’s served as interim chief of police on three occasions, and knew he could do the job, he experienced a lot of sleepless nights during his first two weeks as chief.  “All of a sudden you realize you are Number One,” he said. “All of sudden you are responsible for everybody else, whether it’s good or bad and you go home at night and hope nobody gets hurt. That nobody makes us hurt them and that no one in the City of Greenville hurts each other.”

Sauls said he is pleased with the department’s crime reduction activities but it’s a daunting task, especially since there’s been a drop in sworn officers.  However, the department is rebuilding itself. Three officers from other departments recently joined the city force and he’s brought on another three offices. At least four other officers are joining in January and soon 10 candidates will start the police academy, Sauls said.  His goal is to focus on the health and wellness of the department and focus on what it means to do the work of law enforcement, which is to enforce the rules of the country, state and community, he said.

“We don’t have to be ugly to do that. We can do that with professionalism, tact and respect,” Sauls said. “But we are going to enforce the rules. The reason we are going to do that is because it keeps us safe.” That means going back to the basics of keeping people safe in their homes, on the roads and in public.

Responding to an audience question, Sauls said interest in careers in law enforcement started waning with the COVID-19 pandemic struck and grew with what he described as “national incidents.” Those national incidents were protests stemming from the death of George Floyd, Breonna Taylor and other African Americans at the hands of law enforcement officers.  However, the police department now has competitive starting pay for new officers and offers specialized training, he said.

“I think we are going to see our numbers back to where they were,” he said.

Sauls said his oldest daughter appears ready to pursue a law enforcement career with East Carolina University police. While he knows some officers who would discourage their children from joining the force, Sauls said he’ll support his daughter’s choice.

“Somebody has got to carry the torch,” he said. “When we are older and not able to defend ourselves, I want young, smart, vibrant men and women out there looking after me.”

Greenville police officers are fortunate because the majority of residents in the city are supportive of their work, he said.

An audience member asked Sauls why there has been an uptick in shootings and how it can be prevented.  Greenville sees a fair share of shots fired calls and individuals who are injured, Sauls said. It’s one of the crimes that is rising and the department is saturating areas where calls are increasing to find the suspects.

“My opinion is there is a lack of respect, a lack of compassion and a lack of love among those individuals,” he said. Unfortunately, many of the assailants they detain don’t have respect for themselves or for human life, he said.  Sauls said society also has to work on limiting access to firearms, starting with not leaving them in unlocked cars.

“I’m a Second Amendment guy. I grew up in shooting sports all my life, I love the outdoors, I love to hunt and fish so I’ve always had firearms around me,” Sauls said, adding they were always secured.  People have to make sure their guns are properly locked up. Locally, and statewide, the judicial system needs to make sure people committing gun violations receive maximum punishment, he said.

“We are working with as many of our outreach organizations as we can. Specifically, (organizations) that address domestic violence, violence against women and human trafficking.”

The department also is partnering with Trillium Health Resources, a manager of services involving substance abuse, mental health and intellectual/developmental disabilities, to employ a co-responder that works with officers responding to calls involving people in crisis.  Sauls said based on what he’s seen, he believes the services will be very beneficial. 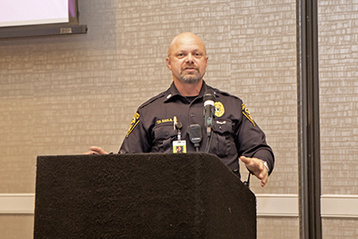 Greenville Police Chief Ted Sauls was the guest speaker during the Greenville-Pitt County Chamber of Commerce's Power Luncheon on December 13, 2022.