Greenville, NC (September 13, 2021) — Greenville officials are recommending the city use more than 90 percent of its federal pandemic relief dollars to invest heavily in recreation facilities, including a major renovation to Guy Smith Stadium and ramping up improvements to the Town Common.

An expansion at Guy Smith of up to $10 million aims to bring summer league baseball to town, while another $10 million would build a new amphitheater and other amenities at Town Common and connect the park with new pedestrian and bike trails to parks north of the river.

The proposals were among several outlined by Assistant City Manager/Chief Financial Officer Michael Cowin during the Greenville City Council’s Thursday meeting. The city is expected to receive $27.34 million from American Rescue Plan funding approved by Congress earlier this year.

Staff recommends spending $2.65 million for home and transit programing, but the remaining $24.7 million will go to programs identified as “local fiscal recovery funding” with 92 percent being spent on enhancing leisure and entertainment opportunities.

“We are a growing community and our need for activities and entertainment also will be increasing,” Cowin said.

The Coastal Plain League, a summer baseball league that features collegiate players, has 15 teams located in Georgia, the Carolinas and Virginia.

The league and Capital Broadcasting sent the city a letter of interest saying they want to relocate a struggling team to Greenville, specifically Guy Smith Stadium, Cowin said.

The league said 25-30 games will be played at home and average attendance will be 1,000 people per game.

However, the stadium must be expanded and renovated, he said.

A rental agreement, which includes a sharing arrangement and facility fee must also be negotiated along with an agreement for field maintenance and other operating expenses.

Needed renovations and expansion include extending outfield fencing, building a pavilion for outdoor seating, eating and viewing, adding more seating along the first and third base lines and refurbishing the exterior. Other improvements include replacing the scoreboard, improving the bathrooms and concession area, gating around the park perimeter, adding a team field house and expanding parking.

Space currently occupied by the community pool can be utilized in the expansion, Cowan said. A new pool is under construction at Thomas Foreman Park and C.M. Eppes Recreational Center.

It’s estimated the project could cost between $8 million and $10 million, depending on the scope of the project and construction costs. Cowin said the city also would reach out to the Coastal Plain League, private donors and sponsorships and advertisements for funding.

The city recently completed a citizen survey that showed that 80 percent of citizens said that improvements to the Town Common were important because it would attract the type of events people wanted to attend, Cowin said.

The project also would involve a request for proposals for a ticketed concert series at the Town Common, he said.

Between $1.5 million-$1.7 million would be spent expanding Thomas Foreman Park’s campus to add a second baseball field and an outdoor basketball court, replace the tennis court that was demolished for the new community pool, add access to the South Tar Greenway, increase parking and add the facility it to the African American Heritage Trail.

It’s also recommended that $2 million-$3 million be used to create pedestrian access from the Town Common to River Park North by converting one lane of the Greene Street Bridge to a pedestrian/bicycle lane, using a barrier to separate people from vehicles, Cowin said. Once across the Tar River, the city will build boardwalks, primitive trails and a canopy walk that will connect to River Park North and Wildwood Park.

The remaining $2 million will be used to fund grants for small businesses impacted by the pandemic, make street improvements funded through lost revenue and provide premium pay to essential city employees.

Cowin said staff recommends holding public input sessions and presentations to community boards and civic groups in September and October and have the council discuss the recommendation at its October workshop session with an eye toward adopting the appropriation plan in November.

Planning and design would begin in January, Cowin said.

Federal guidelines require all funding be appropriated by Dec. 31, 2024 and all money spent by 2026.

Councilwoman Monica Daniels asked if some funding could go toward upgrading the Greenfield Terrace Recreation Center. Daniels’ said it’s the only recreation center in the community that hasn’t been upgraded.

Cowin said the request would be discussed.

Councilman Will Bell asked if Uptown Greenville would qualify for funding. 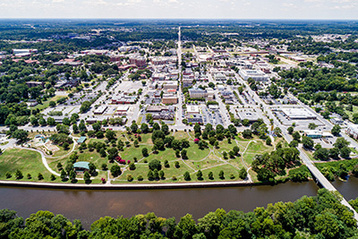