GREENVILLE, NC (April 20, 2021) – Dr. Philip Rogers, exactly 37 days into his role as the 12th chancellor of East Carolina University, spoke to members and guests during the Greenville-Pitt County Chamber of Commerce’s Power Luncheon on Tuesday, April 20, 2021.  The Chamber's April Power Luncheon was a hybrid event that included virtual participants and a limited number of in-person guests.

The growth, development and innovation that has occurred in Greenville since Rogers’ time as chief of staff at ECU, from 2008-2013, is one of his biggest takeaways since being elected chancellor.

“I told folks on the search committee there were a couple of times when I was here on my campus visits that I had to pull my car off on the side of the road because I didn’t recognize where I was,” Rogers said.  “I’m so proud to be back here yet again.”

Rogers credited his time as the senior vice president of learning and engagement for the American Council on Education for putting him at the center of the higher education debate throughout the country and said he is excited to bring learned practices back to Greenville and work with the business community for the betterment of ECU.

Something that Rogers is often reminded of is the advice shared with him from Elon University President Emeritus Leo Lambert.  “Leo used to say to me on a regular basis, in order to be a player in the higher education market, you have to figure out how you can reinvent your institution within the confines of the commission, every five-to-ten years, in order to stay ahead of those curves,” Rogers said.  “We have to think about who we want to be and how we want to actively lead our mission in a meaningful way.”

For the virtual participants and those attending in-person at the ECU Main Campus Student Center, Rogers provided an overview of the top issues facing the national higher education context today and the role that ECU can play in meeting those challenges.

The importance of strengthening and firming the public’s trust in higher education is an issue that Rogers felt there was a lot of work left to be done.  There are a lot of negative narratives that exist about universities across the nation, according to Rogers, specifically the skepticism people have about college being able to provide a good start in life.  “By the numbers, I think we all know that the case for college remains more compelling today than ever before, Rogers said.  “I think we have an opportunity to build our efforts at improving the path to opportunity.”

Another issue facing the national higher education landscape is the report of a decline in enrollment due to the COVID-19 pandemic.  Rogers said enrollment is not something that is unique to ECU’s context, but an American higher education problem.  The latest data indicates a 3% drop in overall enrollment across the country over the past year and a 4.5% drop in undergraduate enrollment since this past spring.  Despite the downward trend lines, Rogers is optimistic about where ECU currently stands, but did note the importance of keeping an eye on the long-term goal.

“I want to remind this group as a big takeaway today that we have work to do together to build a destination that really merges all of our streets together as a community into one place because we all have a role to play,” said Rogers.  “We all have a role in recruiting students, faculty and staff to this region and I hope we all join together to tackle that endeavor as a team."

The short and long-term financial viability of institutions is another issue that is at the top of the list when it comes to impacts on higher education.  Rogers said the American Council on Education estimated the total loss in revenues and impact from the pandemic was about 120-billion dollars across the more than 4,000 institutions of higher education in America.  Rogers remains hopeful that ECU continues to ensure a fiscally strong and viable institution well into the future.

Additional issues that Rogers touched on as being impactful to higher education included the business of intercollegiate athletics; connection with business and industry; federal policy initiatives; mental health of students, faculty, and staff; equity inclusion and social justice; student success and digital technologies; and the global pandemic.

Rogers said ECU was working on preparations to return to normal operations for the fall semester, which will include in-person classes, open dining halls and more density in dorm rooms.  “ECU is going to be open for business and we need your help in communicating that to prospective students,” Rogers said. “We must remain intentionally aligned around our mission and have to stay focused on the future and we have to double down on innovation to serve as the foundation for all that we do.”

The Greenville-Pitt County Chamber of Commerce's 2021 Power Luncheon Series is presented by, Ward and Smith, P.A. 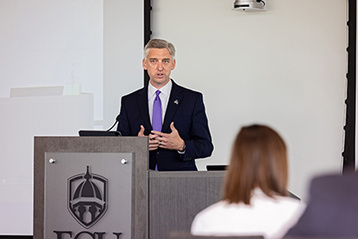 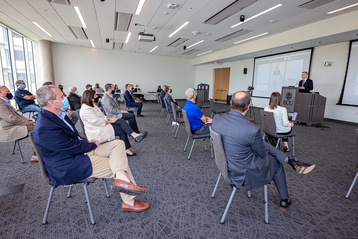