One year after making its first lunches for students shut out of school due to COVID-19, Pitt County Schools has marked the 2 millionth meal served during the pandemic.

Thousands of students attending one of more than three dozen schools celebrated with a taco Tuesday of sorts, with a menu that also included chicken quesadilla pizza, tortilla chips and salsa. Hundreds of virtual students had meals delivered or served carry-out from one of seven locations across the county. Despite the rain, a sign spelling out “PCS 2 MILLION MEALS” was erected on the lawn of the district’s central office building to acknowledge the achievement.

“We’ve never been more proud of our school nutrition and transportation employees (than) in the last year,” PCS Public Information Officer Jennifer Johnson said in a statement. “These essential workers have accomplished an incredible amount in the last year, and serving two million meals on the very anniversary of school closures a year ago is reason to celebrate.”

While the number is notable, Gretchen Wilson, PCS school nutrition services director, said it actually represents fewer meals than in a traditional school year, when 15,000 to 17,000 meals are served daily. But she considers serving millions of meals under the unprecedented circumstances of a global pandemic to be no small accomplishment.

The district began serving lunches curbside on March 16, 2020, the first day of school closures. Wilson’s staff members had begun planning the weekend before to determine how to feed thousands of students who would ordinarily get to eat in the cafeteria.

“Monday morning we trained them and got it all out there,” she said, incredulously, “and hot meals at that. We weren’t just doing cold meals. We were doing hot meals from pretty much the beginning. That was the awesome thing.”

As instruction remained virtual for the rest of the spring semester, school nutrition employees, sometimes aided by teachers, teacher assistants, bus drivers and custodians, continued to work to get food into students’ hands. In addition to curbside pickup, schools loaded meals on buses, offering free delivery across the county for ages 1 to 18, regardless of whether or not they were PCS students.

During this same time, workers were adapting to new technology that allowed them to keep track of meals in the field.

“We had to use hotspots; that’s just something my team’s not had to do,” said Wilson, adding that Zoom meetings also were new to her employees. “We’ve all had to expand in technology knowledge so much more than ever.”

In addition to serving breakfast and lunch, the district worked with Greenville Produce to offer free, fresh produce each week at various school sites.

At its peak, the school district served as many as 17,000 meals a day, reaching the 1 million meal mark by early July. Had the feeding program continued at that rate, the school nutrition program would have been celebrating its 3 millionth meal by now.

But when schools began on Aug. 17 with about half of the district’s 23,000 students alternating weeks of attendance, the number of meals served was reduced to a fraction of what had been served during the previous school year. In the early days of the return to school, the district, which had temporarily ceased its meal delivery services, was serving about 5,000 to 6,000 meals a day.

“A lot of kids were home doing virtual at the beginning,” Wilson said.

About 50 nutrition workers were assigned custodial duties to keep them on payroll. Pitt County Schools Chief Finance Officer Debra Baggett told the Board of Education last fall that the School Nutrition Program stood to lose as much as $300,000 a month under those conditions.

While fewer meals were being served, expenses continued to mount. The district needed different types of disinfectants that could kill the coronavirus but be safe for use around foods. It had to invest in new equipment to keep food at safe temperatures for transport on buses or to classrooms where students ate their meals. Every food item served had to be packaged.

“It’s actually almost taken more labor in some ways,” Wilson said. “At the beginning, we were buying from anywhere we could get the product because our regular vendors couldn’t get us the bags, we couldn’t get the hinged trays.

“We have done so many different types of feeding,” she said. “This has been very unusual for all school nutritionists throughout the United States.”

As the state allowed for relaxed distancing requirements for elementary schools in October, more students could begin having their meals at school. The district launched weekend distribution at Thanksgiving and expanded it to five sites. During Christmas break, families received about 800 meals at curbside distributions. Schools even made an attempt at offering evening curbside meal pickups, but there was insufficient demand to maintain it.

As more students were scheduled to return to the classroom in January, the school nutrition program was poised for another increase in service. Instead, the district moved to all-virtual instruction for two weeks due to a spike in COVID-19 cases.

“We kept increasing as the students came back,” Wilson said. “If we weren’t out those two weeks, we would have met 2 million two weeks ago.”

Since then, meal service has increased to about 12,000 per day. Higher numbers are expected in mid-April, when middle school and high school students will be able to be on campus each week, rather than alternating weeks.

School nutrition employees are planning curbside meals for spring break and then will shift to cover schools with increased needs after Easter. They are also making plans for June and July, when it is likely that many students will be on campus for summer school.

“They’ve not had down time,” Wilson said. “Our staff has been working. We’ve had people out with COVID or quarantine so we’ve had to move people. I’ve had staff in schools that they’ve never been in, so I’m very proud of my team for just taking it as it goes. Our goal is to feed every child that needs a meal.

“They have been so willing to step up and make all the changes that we might ask of them,” she said.  “They have not wavered. Some might have been frustrated, but again, the end game is to make sure we’re feeding those kids.” 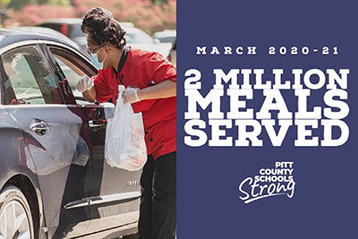