GREENVILLE, NC (March 30, 2021) – The Greenville-Pitt County Chamber of Commerce awarded Dr. Ronald “Ron” Mitchelson with its 2020 Citizen of the Year Award during its Annual Membership Celebration, presented by Vidant Medical Center, on Tuesday, March 30, 2021.  The announcement was made via a live stream video of the event.

Mitchelson most recently served as Interim Chancellor of East Carolina University and has worked in higher education for the last 42 years.  He came to ECU in 1999 as a professor and chair of the Department of Geography.  He served as Provost and Senior Vice Chancellor of Academic Affairs from 2015 until his appointment as interim chancellor in October 2019.  Mitchelson’s service as Interim Chancellor came at an extremely critical time for the university, but his leadership and management allowed ECU to continue to maintain its focus and carry out its mission of being a national model for student success, public service and regional transformation.

Throughout his distinguished career, Mitchelson has been instrumental in moving ECU forward for the betterment of the students, faculty, and staff.  Under Mitchelson’s leadership, ECU increased its four-year graduation rate through his “Finish in Four” initiative.  He advocated for funds during the NC Connect bond to support construction of the new Life Sciences and Biotechnology Building, which will allow students to address real-world problems in the region.  Mitchelson has helped to guide ECU’s Millennial Campus to fruition and has been at the center of Intersect East, a project that is expected to create up to 1,500 jobs with a financial impact exceeding $141 million annually.

Mitchelson has been extraordinarily committed to Greenville-Pitt County and has been integrally involved in various economic development initiatives for the community, as well as eastern North Carolina.  He, along with many others, played a key role in the creation of the Greenville – Eastern North Carolina Alliance, a public-private partnership that works to strengthen economic progress by bringing new capital investment and new good-paying jobs to our community.  “With Dr. Mitchelson’s leadership, Greenville and Pitt County have worked together to create jobs and investments in a much more focused manner, which has led to more quality employment opportunities for our region,” said Tony Cannon, general manager of Greenville Utilities Commission.

Over the years, Mitchelson has been a formidable partner with the Pitt County Health Department, Vidant Health System, and City of Greenville.  Prior to students returning for the fall semester of 2020, Mitchelson was actively involved in the development of a Contact Investigation and Tracing program with ECU Student Health Services and the Pitt County Health Department.  This partnership helped to rapidly recognize and control the COVID-19 outbreak that occurred with the opening of the fall semester.  “Dr. Mitchelson has been a strong and supportive partner throughout the response to COVID-19 and he cares deeply about ECU and the community,” said Pitt County Health Director, Dr. John Silvernail.

Mitchelson has been a champion for literacy through his work with the United Way of Pitt County and his enthusiastic support for the Imagination Library, a free book-a-month program for all children living in Pitt County from birth to age five.  He connected ECU with the program and has volunteered his time and financial support over the years.

“His vision of leadership and collaboration is dynamic, participatory, and transparent and he believes it must involve all stakeholders,” said Dr. Grant Hayes, interim provost and senior vice chancellor for Academic Affairs at ECU.  “His caring commitment, dedication, genuineness, and empathy are of the highest level and all of the qualities of a servant leader.”

Before coming to Greenville and ECU, Mitchelson held faculty and administrative positions at the University of Georgia and at Morehead State University in Kentucky.  While in Kentucky, he was appointed State Geographer by then Governor Brereton Jones.  In 2010, Mitchelson was honored by the North Carolina Geographical Society as Educator of the Year.

Mitchelson, who announced his plan to retire from higher education at the end of June 2021, is the 53rd recipient of the Citizen of the Year Award that honors a man or woman who has made significant contributions to the Greenville-Pitt County community.

Additional awards presented during the Chamber’s Annual Membership Celebration included the 2020 Ambassador of the Year and Young Professional of the Year.

Crystal Corbett, development officer for the Vidant Health Foundation, was named the 2020 Ambassador of the Year, as voted on by her peers in the Chamber’s Ambassador Program.  Corbett has been a Chamber member for 13 years and has worked for the Vidant Health Foundation for the past three years.  The Ambassador Program consists of volunteers from the Chamber membership who donate their time to assist the Chamber in various activities and encourage meaningful and beneficial participation in Chamber-related programs.  Corbett is the tenth recipient of the Chamber’s Ambassador of the Year Award. 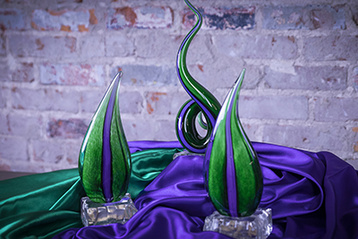 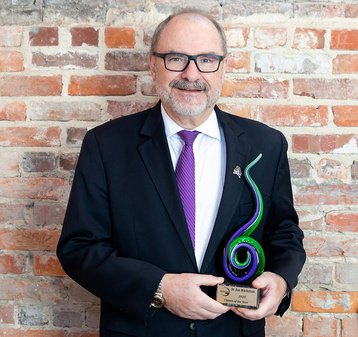 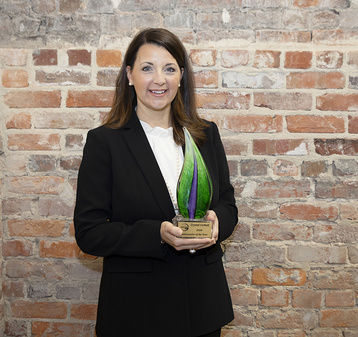 Crystal Corbett was named the 2020 Ambassador of the Year. 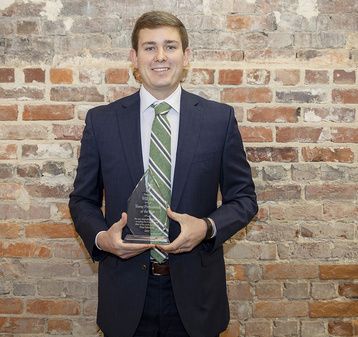 Will Bell was named the 2020 Young Professional of the Year.